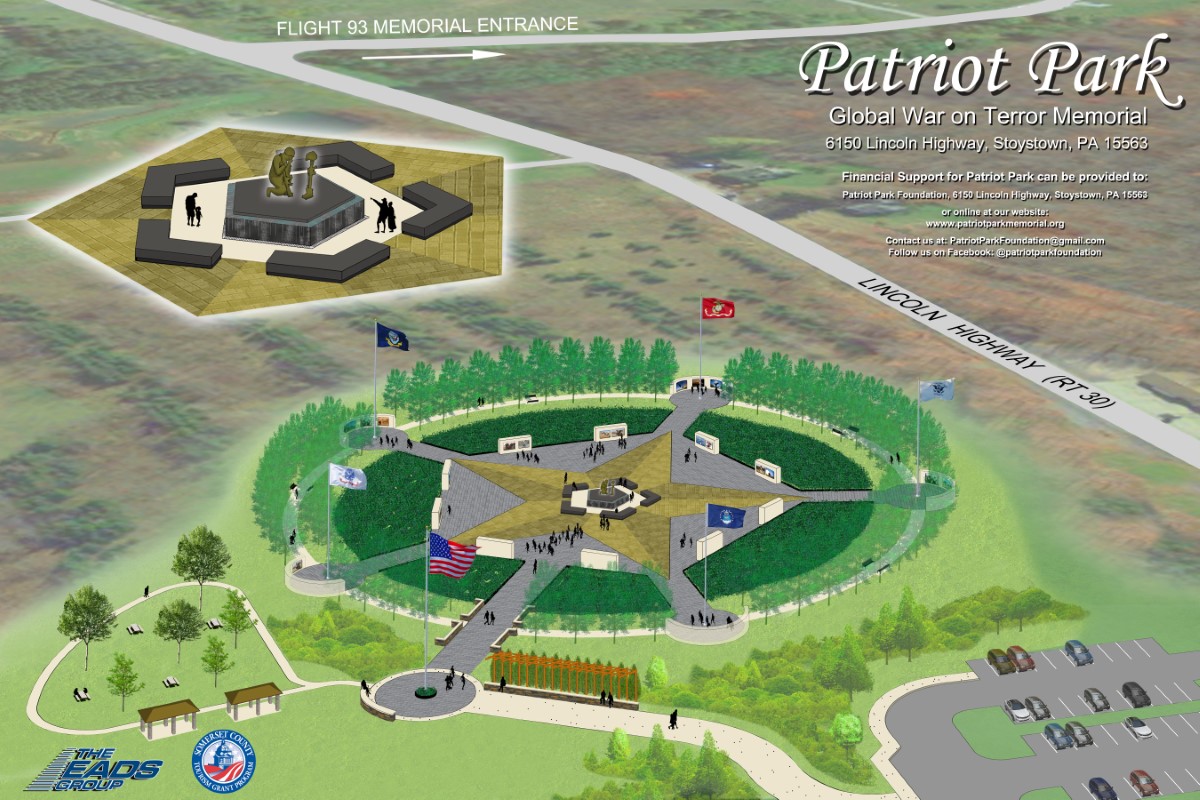 Patriot Park is a project beginning to take shape in Somerset County, Pennsylvania within the boundary of Flight 93 National Memorial.

The battle that raged onboard United Airlines Flight 93 on September 11, 2001, prevented what would have been another awful tragedy on an already tragic day. In fact, the passengers onboard Flight 93 can be referred to as, “the first combatants’ in what came to be known as the “Global War on Terror”. Since that infamous day, millions of Americans have bravely served in the military and over 7000 brave men and women have lost their lives in the Nation’s efforts to eradicate terrorism. Thousands more have suffered severe and debilitating injuries. Patriot Park has been conceived as a place where our gratitude can be expressed.

Nestled inside the northern boundary of Flight 93 National Memorial, the site is perfectly situated to serve this worthy purpose. The Park is located on the land beneath the skies where the battle on United Airlines Flight 93 raged. The bravery exhibited by passengers onboard Flight 93 and others at the World Trade Centers and the Pentagon on that day inspired many young Americans to enlist in the Armed Forces.

The centerpiece of Patriot Park is the Memorial Plaza. It is designed to remember those who have died in the line of duty fighting the Global War on Terror. A bronze statue of a soldier kneeling next to a battle cross focuses the visitor on those who died and also on those who remain. Benches surrounding the statue will provide a place for visitors to sit and contemplate the ultimate sacrifices made by so many as they gaze across the thousands of names etched in the brick pavers radiating outward toward each point of the gold star.

Around the perimeter of the Memorial Plaza are story boards that recall the stories of valor, sacrifice, and compassion exhibited by our Armed Forces as they pursue their missions. The Global War on Terror is a conflict unlike any other our military has ever been asked to wage. It has placed enormous strain on our Armed Forces and the families that support them. Many of the story boards will seek to raise awareness of the needs our veterans and their families have as they serve in harm’s way and as they transition back to civilian life.

Other features within Patriot Park will be picnic pavilions and tables where families can gather and rest after visiting the site. Groups may also use the pavilions as informal meeting spaces where families and GWOT Veterans can reflect on their experiences.

Phase 3 of the project proposes an Education Center from which Patriot Park Foundation can provide information to both military and civilian visitors about services available to assist active duty troops and veterans. The center will also house meeting rooms, a theater and indoor GWOT displays. Future plans also envision a challenge course where veterans can gather and compete in military style challenges as they and their families renew friendships.

A Phase 1 plan for 2021 has been built to provide a start to the project while awareness and funding is being raised for the Patriot Park GWOT Memorial. Phase 1 consists of the Field of Honor Flags Display contains over 7000 flags, one for each service member who has died in the Global War on Terror. The display puts into perspective the enormous sacrifice made by the courageous members of our military. Story boards are also be part of the design as well as a large US flag and flags of the military branches.